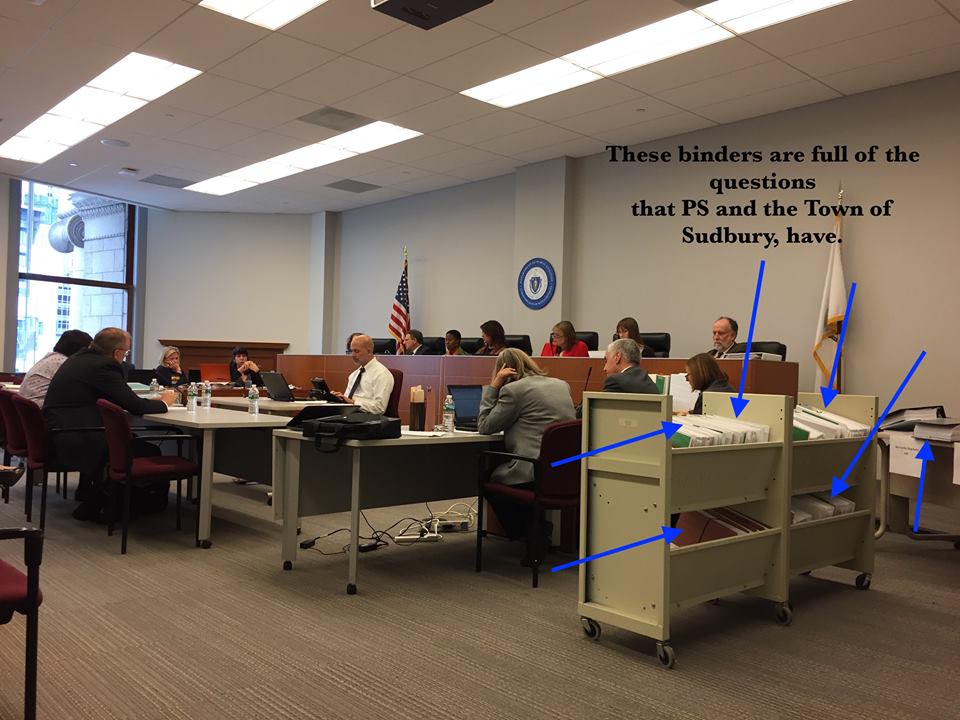 I’ve been re-running the events of the past week in my brain. A few days in “court” with Eversource, the EFSB panel, the town of Sudbury, PS attorney Richard Kanoff, and a few indefatigable Sudbury residents. It’s hard to describe but I thought I would share a moment in time with you all. The Sudbury lawyer asked a question during the hearing which I will paraphrase as I heard it and not as she said it. She was eloquent and sharp, my recap rambles a bit but as I recall it, her question to E went something like this:

There was a long pause, the E witness looked at her panel of attorneys and the lead attorney asked to go off the record and have a conference outside the room with the witnesses. The EFSB chair allowed this, the stenographer stopped typing, and a dozen people left the room with the two witnesses. 14 in total. I counted.

It took 12 corporate litigators, support staff, consultants – to answer the question that the Sudbury lawyer already knew, of course, but asked because she wanted to make sure it got in the record. (It will take at least 20 months to build the line if allowed.) 12 lawyers and support staff left the room with the 2 witnesses to confer in the hallway.

More people left to confer about the question than were left in the room. I wish every person in Sudbury could attend at least one day of the hearings. You would then know what your money has gone to and how much good it is doing. My heart just about burst at that moment – both with outrage and an equal amount of pride.

Outraged that Eversource has billions of (our) dollars to fund bringing a dozen corporate litigators and support staff to this hearing to argue that their unnecessary transmission line is necessary. Outraged that the process that got us here is what it is. Outraged that any community should have to raise huge money to have a seat at the EFSB’s table to be ALLOWED to have a say in what happens in their own community.

So freaking proud that the Sudbury lawyer called them out and hit the nail on the head with her question. Her question highlighted that the TL hasn’t been needed in the past ten years. The doomsday scenario that E claims might make it necessary has not come close to happening, and it would not be completed for another two years anyway.

So freaking proud that the binders of testimony on the bookcase (see the photo) are FILLED with the questions our community asked about this rotten TL project as well as our well-researched objections to all of it. So freaking proud we have made E and the EFSB take a look at this TL plan, how it came to be, the process that led to it, the reasons it should never be built, why ratepayers should not fund it, and all the other holes in their arguments.

The best disinfectant is light.

Richard Kanoff believes in us, in our case, and that we can win. He is helping make donated dollars go further, for example, attending the hearing without support staff in an effort to economize. And so it was 12 against 2. A true David vs Goliath story and we know how that one turned out.

The proceedings are a weird combination of being both an outrage and being incredibly freaking awesome at the same time. It brings to mind Margaret Mead’s quote that “a small group of thoughtful, committed citizens can change the world; indeed, it’s the only thing that ever has.”

If you would like to see the case up close and personal, you are welcome to attend the hearings at South Station in Boston.

Thank you, doesn’t even begin to cut it but thank you again for sending hard-earned dollars to protect Sudbury. More are needed, regrettably. But please know this – all donations are doing a whole lotta good.